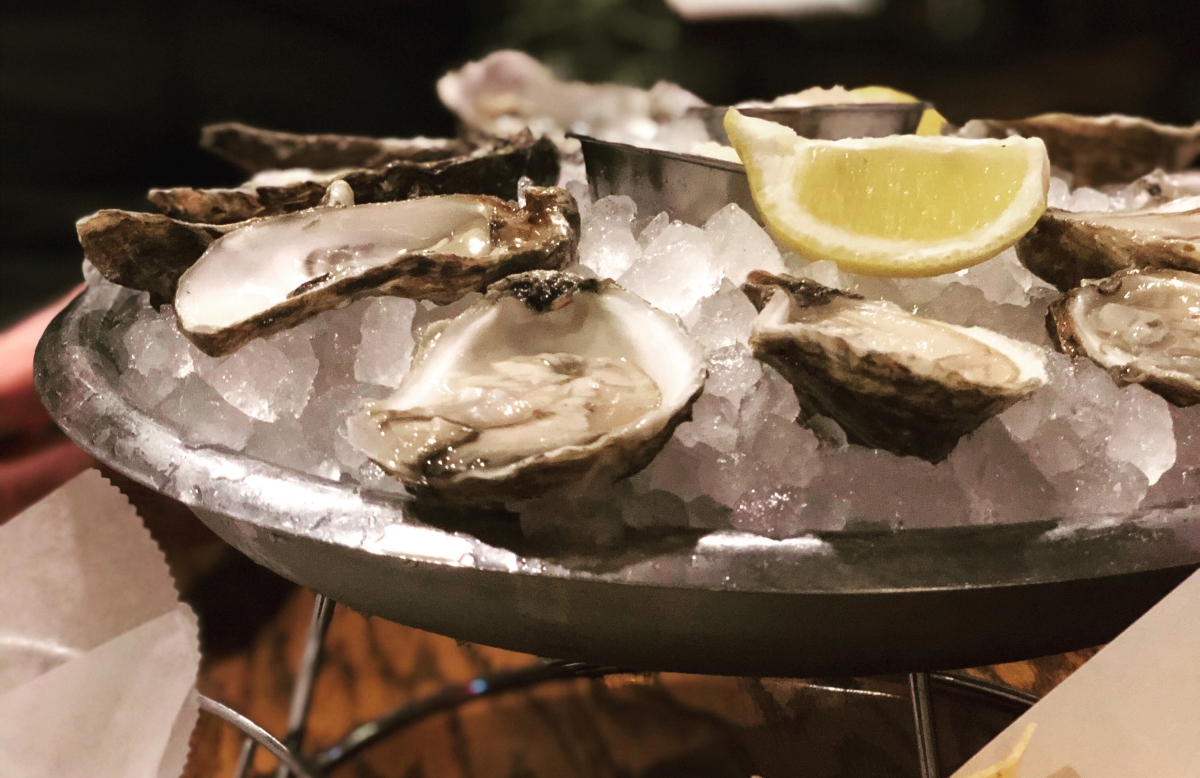 We were sitting there, quietly enjoying one another’s company and the lively scene unfolding around us. Warming up and into our seats, after a brisk eye watering walk to the restaurant. This is Chicago, a first for me. A bitter cold initiation. It’s the edge of happy hour and the bar is filling up quickly with the hum of those wrapping up their week. It’s mostly a business crowd in dark suits, dark wool coats — the tailored professionals unwinding. It’s not so different in that respect, the unwinding. We all seek company and camaraderie after our week. Companionship connects us.

We came for the oysters. The live music. The scene. It did not disappoint. That’s when I noticed the three of them winding through the room up to the corner spots at the bar. Three young women, clearly coming from work for a drink. It’s not that they were any different from the rest of the crowd, but I was sitting facing them and couldn’t help but notice them approach and grab seats. A harmless girlfriend evening out. Long-blond-ponytail was clearly the crew boss of this group, the female that sets the tone and demands the most attention. They ordered three espresso martinis, which some might say speaks of their age. I say it’s not worth the headache, and clearly this trio didn’t quite have the capacity to manage the booze. We’ve all been there. I have zero judgement.

A crisp glass of wine is placed in front of me, and the band is setting up. Conversation all around is convivial, laughter mingling in with sounds of eating, silverware clinking. My cheeks are warm and flushed from the dramatic shift in temperatures. The girls are getting louder and my eyes involuntarily keep darting their direction. A watchful eye on this little social scene. They’re discussing someone’s heartbreak, a subject that never fails to raise the blood in a female. These girls are here for one another, and to bust his balls. It’s ok, he will never hear about it and they will feel better for it. The band starts playing and the general volume increases overall. This is fun. My love looks at me over his glass as he hears the first female screech and cackle. I know he has issues with loud piercing females, it’s a pet peeve that has been discussed more than once. Unfortunately for this trio, drinking is in direct proportion to volume, and it’s quickly going nowhere good. They are loudly yelling over the music. We hear their first political mutterings.

Long-blond-ponytail, who we will name LBP, is quite indignant and matter of fact as she relays her personal pet peeve with immigrants. She’s loud in the ear-piercing way alcohol permits. The bartender, a Hispanic, places another round of the caffeinated cocktails in front of them. Service with a smile. It’s not worth saying anything. Yet. LBP leans into her stool-companion, and loudly whispers how great Trump is and will take care of the whole thing. Those foreigners. That don’t belong. He’s the man. I look around to see who else’s ears are burning. I’m 15 feet away, how can we be the only ones that hear this? I look at my guy and he’s clearly hearing it all as well.

The band’s lead vocalist has one of those big brassy voices and they’re doing a fabulous job with the set. She busts into a rousing version of Amy Winehouse’s Valerie, and one of the three hops off her stool and starts up a stumbling drunk goose step, almost in time to the song. I’m fairly sure this isn’t a trending dance move. It resembles something more in line with Steve Martin in the Jerk. It is amusing, or would be if LBP didn’t take it up an octave to draw attention back to herself. The goose returns deflated to her seat, or tries to. By now things are getting ugly. She stumbles, misses the seat, pulls herself back on then tries for another few dance steps in the six feet between her and the next table. She gives up and slumps onto the bar, too drunk worn to make more of an effort. It is not going well for this one. Meanwhile we’re privy to the ongoing super rant about “those people” and I’m feeling the energy shift. I look at our waiter apologetically trying to mentally telegraph that we don’t agree with this one. Does this twit not see who is in the crowd around her, sitting next to her at the bar, serving her this evening? Is she such an imbecile that she’s actually going to talk loudly about her disdain for foreigners taking over the country, our country of immigrants and beautiful people from all walks of life? They, no she, is loud and now disturbing our evening and others around her. I observe glances- some in pity, some irritated but apparently none in agreement. No one is nodding their head.

This is the conundrum at hand. What do you do?

This is the conundrum. What do you do? What is the right thing to do? What can you do? Some would step over to them and ask them to zip it, and risk the absolutely certain to follow inebriated retort. They are now espresso vodka emboldened after all. Well, LBP is, one looks slightly uncomfortable and the other has her head on the bar. The fact is, we allcame here for a nice evening, good food and music and some laughs, not for an apparently privileged drunk standing or sitting on her political soapbox. I am now judging. I am judging hard.

Quietly, my beloved gets up and excuses himself. He returns a few minutes later and angrily says he wasn’t going to let them ruin our evening and went to inform the manager that this trio has now become too loud and intolerable, and would they please ask them to either quiet or leave. Rather than confront them himself, he chose a course of action that keeps the potential timebomb to a minimum. Ridiculous as it is, I get nervous. I don’t like to make waves, and while I’m also annoyed enough to wish a tidal wave washes them out on the street, I wouldn’t have complained. I find this realization about myself also irritating. Sometimes you need to speak up. Sometimes it’s OK to speak up for those that won’t. Is it your ethical obligation to represent? Yes, actually it is, but that doesn’t make it easier.

As I ponder this personal flaw, we watch one of the managers circle wide behind the three incognizant, sussing out the scene and then whisper something into his little black secret service looking earpiece. He walks past them and around the other side of the bar. The band has started a bluesy version of a Stone’s song. Manager two, clearly higher up on the ladder, quietly approaches the group and whispers something into LBP’s ear. His body language is mild, his eyes are steel. I would have died a thousand deaths of horror and embarrassment, but then I wouldn’t be in this situation. For a fleeting moment I watched white hot anger flash across her face, not embarrassment. She doesn’t apologize. I’m stunned. Doesn’t that sum it all up?

Bundle up gals, it’s cold outside.

I’m a graphic designer by trade and a creative type, travel craving, mother of two, nature worshipping, cocktail enthusiast and perfume fanatic by life. View all posts by poolcreative